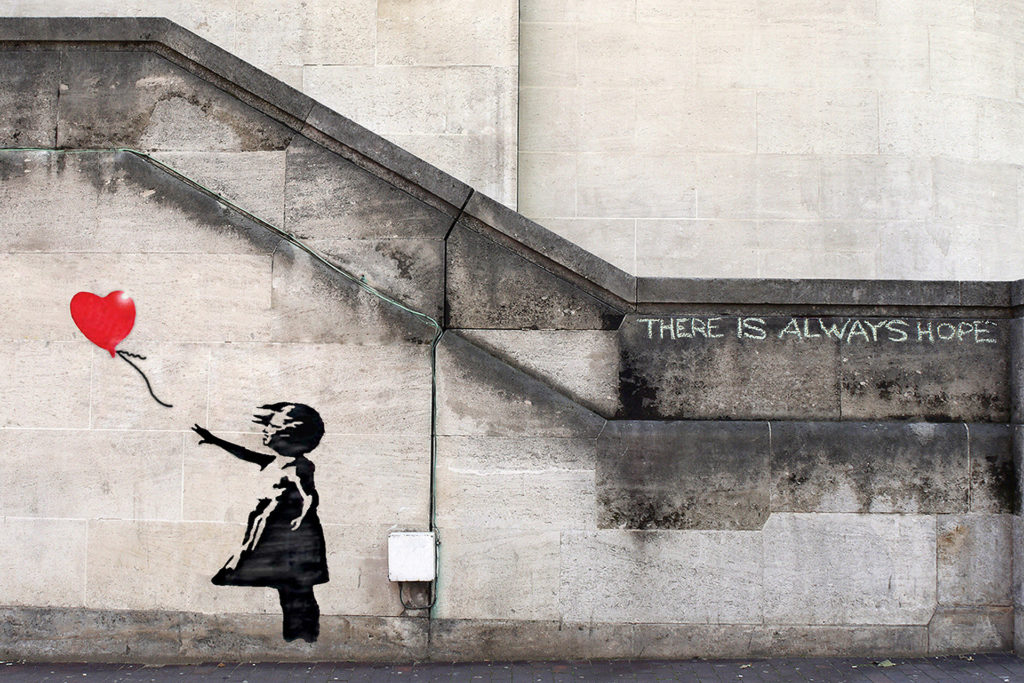 The “CircolodegliInquieti” decided to award the 2019 “Restless of the Year” prize to Banksy.

With the street artist, the association honourshis presence – his works that for many years have been appearing all over the world– and at the same the man’s absence, who demands an uncompromising secrecy around his identity.

Banksy is to be found between his absence and his presence. Between the rapid action with which he makes his urban graffiti and the absence of the subject who acts and invents, Banksy gives himself to us.It’s in this invisible and indecipherable passage that the association finds that shard of restlessness which makes the artist worthy of receiving the award. This restlessness also arises in the dissonance emerging from the contrast of the images of his work and the context where they are presented.

The work itself is clear, descriptive, linear, comprehensible at any age. The medium where it is traced, a war wreck, the plasterwork in an alley, an emergency door, tears up the reassurance of the image and provokes an attentive restlessness, obliging the spectator to speed up their thought to adjust their emotional dissonance.

Banksy offers his artistic production to all, he is the author of a sharp and popular form of art, with which he grasps and points out the contradictions, the destructions, the hopes shared by an interconnected world thatbecomes more and more disturbing as it gets more and more globalised.

He highlights what happens in the world, with his work manifesting itself where it is needed, while the man behind it disappears. The hood covering his face can be possibly considered a mask and thus Banksy becomes a superhero, who appears, for free, where his presence is necessary, exactly like the better-known superheroes. What kind of dialogue exists between the man and the artist? Is it quiet or conflictual? We don’t know, as we don’t know if Banksy likes the man he is in his secrecy. Likewise, we don’t know if the man feels free with Banksy, or if he is a prisoner of his fame.

The “Restless of the year” award goes to Banksy and, with him, to the person assuming the guise of Banksy to gift his notes to the world, scattered on the walls of five continents.

This website uses cookies to improve your experience while you navigate through the website. Out of these, the cookies that are categorized as necessary are stored on your browser as they are essential for the working of basic functionalities of the website. We also use third-party cookies that help us analyze and understand how you use this website. These cookies will be stored in your browser only with your consent. You also have the option to opt-out of these cookies. But opting out of some of these cookies may affect your browsing experience.
Necessary Sempre abilitato
Necessary cookies are absolutely essential for the website to function properly. This category only includes cookies that ensures basic functionalities and security features of the website. These cookies do not store any personal information.
Non-necessary
Any cookies that may not be particularly necessary for the website to function and is used specifically to collect user personal data via analytics, ads, other embedded contents are termed as non-necessary cookies. It is mandatory to procure user consent prior to running these cookies on your website.
ACCETTA E SALVA